This is an archived version of the 2016 edition of UXLx. The current event website is at www.ux-lx.com

Alan Cooper has been a pioneer in the software world for more than 40 years and, in his role today as éminence grise in the user experience field, he continues to influence a new generation of web designers and entrepreneurs.

In 1992, Alan and his wife, Sue, co-founded the first interaction design consulting firm, Cooper. Within a few years Cooper had established the basic design methods that are used across the industry today and helped to popularize the notion that digital technology shouldn’t terrorize its human users. In particular, his invention, design personas, are almost universally used in the field. He shared his tools, knowledge, and experience in two best-selling books, still in print and widely referenced.

In 1988 Alan invented a dynamically extensible visual programming tool and sold it to Bill Gates, who released it to the world as Visual Basic, arguably the most successful programming language ever. This is how Alan earned the sobriquet, “The Father of Visual Basic.” He started his first software company in 1976 and produced what has been called “The first serious business software for microcomputers.”

Today, Alan continues to advocate for more humane technology from his 50-acre former dairy farm in the rolling hills north of San Francisco. 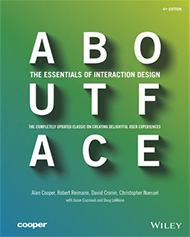 About Face
The Essentials of Interaction Design with Alan Cooper, Robert Reimann and David Cronin Wiley 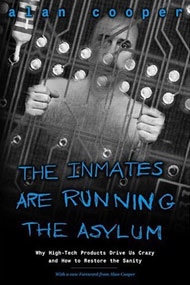 Five years ago, I sold my suburban home in Silicon Valley and moved to an old farm deep in agricultural country. Everything was new to me, but I was most surprised to discover how the new lessons of farming paralleled the important lessons of interaction design. This talk will give you some useful insight into your work by reflecting on the farmer’s job.